Pros Agree Not To Sign Juniors TORONTO. Sept. 19 (CP)^-Pro- * fessional hockey clubs have agreed not to sign any amateur under'the age of 18 without the consent of the amateur club and amateur officials, George Dudley, secretary of the Canadian Amateur Hockey Association, said today. Professional clubs can, however, negotiate with any player who has pasted his 16th birthday, with a view to obtaining his services when he reaches the age of 18. Dudley added that position of players on the contingent reserve list of professional clubs had been clarified. The list will be composed of two categories. The first is made up of proicSMonal players who entered the Services • and therefore remain property of their, respective professional club. They cannot be approached by any amateur organization unless reinstated as amateurs. The second category involves players who have never played professional hockey but have entered into contractual agreements with professional clubs. Such players may be' approached by amateur clubs subject, however, to the players fulfilling their try-outs of optional agreements with the professionals, and subject also to the possibility of the N.H.L. notifying the i I.I.H.A. it is putting into effect the terms of the player’s contract and ( signing him where the contract so warrants. Professional clubs also have agreed that an arrangement whereby players might be borrowed from amateur clubs by professional clubs tor not more than three games a season will be discontinued. It was strictly a wartime arrangement.;
Clipped by Jason P. 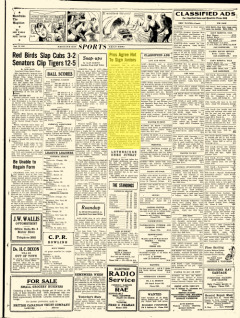