WILL PAY $20,000 LUMP SUMC.A.H.A. And N.H.L Reach Hockey Player Agreement NEW YORK, CCP)—Deadlocked over * the 1946-47 schedule the ^National Hotkey league’s Board ol Governors adjourned Wednesday night . to attend the Louis-Conn heavyweight fight with little .prospect of getting out of New York before today. On the third day of their annual meeting the governors, owners and managers elected officers, discussed by-laws and got to work on drawing up a new constitution. The question of the league presidency, contrary to expectations, did not come up and will be set over until September, when President Mervyn (Red) Dutton's contract runs out. leagues -will-• operate without an|j^apie Leal • Gardens corporatioi agreement as to territorial juristic- j recently, tion and there will be no* player draft from the A.H.L. President Dutton said the application of a Philadelphia group to operate an N.H.L. team next year had been turned down because the league felt it would be impossible to build a suitable rink in Philadelphia by Dec. 1. RUPTURED? L€ it»e ;n rs s- bt -d m Major accomplishment ‘of Wednesday’s meeting -was an agreement between the N.H.L. and the Canadian Amateur Hockey association and the International Ice Hockey association which provided for the payment, of $20,GOO next season to the amateur group for players drafted into the major loop. Dr, George Hardy of Edmonton, President of the I.I.H.A:, said that last year the C.A.H.A. was paid only $5,180 for N.H.L. player drafts. Hanson Dowel] of Middleton, M.S.. president of the C.A.H.A. said the N.H.L. and his body also discussed rule changes and the handling of junior players. Under the amateur-professional arrangement a player may be signed by a pro team when he is .16 but cannct jump to professional company untiL he is 18. “Wherever possible the rules used by the N.H.L. will be used by C.A.H.A. teams/’ he said. Other amateur officials in attendance were George Dudley of Midland, Ont., secretary of the C.A.H.A., and Frank Sargent, Port Arthur, past president. The N.H.L, announced if: had extended its draft agreement with Hie United States Hockey league. ^ a professional loop west of the Mississippi, but said negotiations with the American Hockey league had broken down. In 1946-47. as in 1945-46. the two Question of' the N.H.L, entering the Pennsylvania city is the nSain point of disagreement between the A.H.L. and the N.H.L. After a wartime absence, the A.H.L. will resume operations in Philadelphia next year. The election of committees and officers saw only one major change. Clarence (Happy) Day, coach of Toronto Maple Leafs, replaced Frank Selke on the Board of Man- jiaerntmt. Selke retired from the 1% Holds the muscles together with a soft concave pad* Keeps Rupture tightly closed at all times while working, lifting, walkings or swimming. Light weight-, touches bodj' ’i n but two places. CANNOT SLIP. Reason should leae!it you not to piece a knilb or ball hi opening of rupture ^ v „ which keeps muscles (Can Be Washed^ 'spread apart. Truss Demonstrated Without Obligation Single . $1 5.00 Double. *$20.00 WESTERN ARTIFICIAL LIMB FACTORY Ph. 94 70S 159 Main St. Hours 9—lt;5 Pally — Mondays to * Ctosed Saturdays 1 p.m. New Patented DOBBS TRUSS BULBLESS BELT LESS STRAPLESS Is Sanilrary;
Clipped by Jason P. 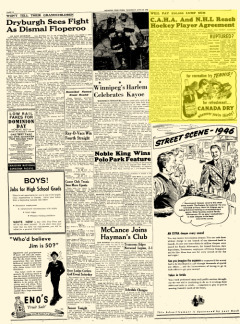