Book bag may hold more than meets eye By Joy Scon Special to The Gazette By probing tiny fibers on a book bag, gigantic pieces could be uncovered in the puzzling 18-month case of missing Asha Degree. Clues found during forensic tests may provide answers to what happened to the girl whose gleaming smile has been posted across Cleveland County. Asha was 9 years old when she disappeared from her Fall-ston home on Valentine’s Day 2000. On Aug. 3, a construction worker reported to police that he found a book bag and other items in Burke County. - - The construction worker said the book bag contained Asha’s name and phone number. While police have not confirmed that the items belonged to the girl, they have been sent to an FBI lab in Quantico, Va., for forensic testing. For 25 yearly Clinton Van Zant served as an FBI agent. He now runs a company that conducts psychological profiles. Van Zant isn’t familiar with the details of the Asha Degree case. But based on his experiences with missing children cases handled by the FBI during his tenure, he said lab tests, like the ones being conducted on the book bag, can open several doors in a case. Van Zant said that a single test may unravel several threads in the case that until seven days ago didn’t have a knot to tie it together. “There is a strong potential should this be the victim’s things that the lab could find something,” said Van Zant. Van Zant said there are a number of things that the FBI lab could be looking for. “Anything that they could extract DNA from,” said Van Zant. For example, a pencil that had been chewed on, a string of hair or a toy are all items that may have traces of bodily fluid and can be tested for DNA strands. Biological material, such as saliva and blood, are the most help to law enforcement. But even if bodily fluid isn’t on any of the items found, Van Zant said that FBI lab tests are so sophisticated that they could detect textile fibers that the items may have come in contact with. Hypothetically speaking, he said, if the items had been placed in someone’s car, the tests could identify the fabric in the car. Law enforcement could then use that information to determine which cars were upholstered with that same kind of fabric. That could be narrowed down to the people in the state that own the same car. The items found last week are the first potential clue in a long time for law enforcement since Asha’s disappearance. During the search last year, police found a pencil, a green marker and a Mickey Mouse hair bow inside the doorway of a tool shed at Turner’s Upholstery on N.C. 18. The shed sat 100 yards or so west of the same highway that a truck driver saw Asha walking along.; 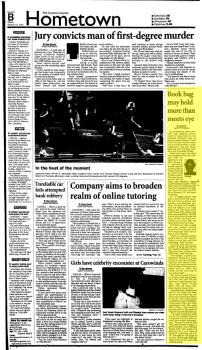