Early Solution in Dispute isC.A.H.A. Moy Be Able To Straighten Away Quebec League Fuss Ottawa. Nov. 6 lt;CP)—Likelihood an early solution to the current dis- between Quebec Senior hockey league officials and the Ottawa and District association was expressed hefe yesterday by George Dudley former president of the Canadian association Mr. Dudley Intimated that no clubs or players would be suspended by the C.A.H.A. pending settlement of the dispute. The meeting was the outcome of a dispute in which the Quebec league had decided to continue operations « outside the C.A.H.A. fold after Hull had been refused permission by the O.H.H.A. to compete in the Q.S.H.L.;
Clipped by Jason P. 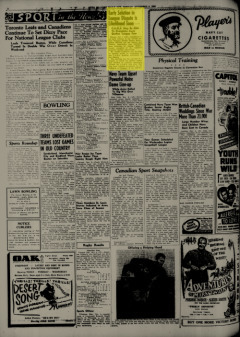