Stankowski caught with wrong clubs in the bag After opening with an 80 in the Colonial, Paul Stankowski was even par tor the second round when he pulled a 2-Iron from his Callaway Golf bag on the 10th tee A Ping 2-iron. In fact, all of the irons in his bag that day were Pings This was peculiar only because of Ely Callaway's threat to file a federal trade complaint just last month. He criticized Adams and Orlimar for allowing two players to carry their bags, but none of their clubs. Stankowski did have the Hawkeye driver and the Steelhead 3-wood, but Callaway had pointed out that all of its 45 tour staff players — with the exception of Paul Azinger — were required to carry at least 10 of the company's clubs. That Stankowski was using his old Pings caught Callaway off guard, particularly since the preliminary Darrell Survey from the Colonial indicated Stankowski had the Callaway X-12 irons in play. Once the Darrell staff left town, he slipped the Pings back in his bag. Within hours of finding out, Callaway sent a fax to Stankowski notifying him that he was in breach of contract. By Monday, they had patched things up.;
Clipped by Earl G. 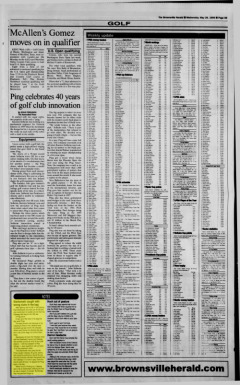 Other Clippings by Earl G.