CAM. Wants j t » 4 • I Knos Slaughter of the crarcs \ treated Mart Cooper, a bridegroom' of a few hours* most harshly by clubbing him lor a pair of homers, each with a man on base. * Ram washed out the rest of the * ► major league games. •i » t * . .1 • i I I 0 I IV CL te Ir te l- PORT ARTHUR, May 17. —lt;?— Past President Prank Sargent of. the Canadian Amateur Hockey5 Association said Thursday the OAJBLA. would try to make “the best deal possible” when its representatives meet the National Hockey j League's in-er-reiations committee j at New ITork June 13. He did net j elaborate. ] lt;The has offered to pay | the CJK.IT.A. a flat S20,OGO a year i for all players under CAJBLA. jurlsdictlon who mm professional. At its annual meeting at Vancouver last month, however, the CA.HA. considered the oifer but decided to press for S2.0G0 for each player turning pro with, a major league team and S 1.000 for each going to a minor league club. (A committee composed of Mr. j Sargent, President Hanson Dowell.1 George Dudley and A. W. Pickard j of the C.AJ3LA. and President W. B. I Hardj' of the International Ice j Hockey’ Association was instructed to re-open negotiations with the N.H.L. and seek, at its own discretion. changes in the player-payment oifer.) * BASEBALL PRACTICE * v* A baseball practice for the House of Lethbridge juniors has been called for Sunday afternoon at the Henderson Park diamond. Team members are urged to be on hand. The baseball diamond Is due east of the present fastball stadium. v ❖ • lt;* | ❖ I lt; ♦RI ONTOF.CONQUERED;
Clipped by Jason P. 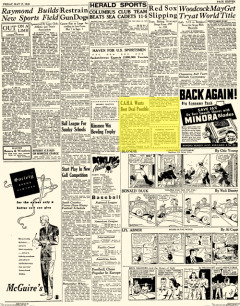