s, Monday, March 30,1S87 Earl Dawson, a native of Rivers, Man*, who rose through hockey ranks to become president of the Canadian Amateur Hockey Assotia* tion, died Saturday after a year-long battle with lung cancer. He was 61. Prayers will be said at 6:30 tonight at the P. Coutu Funeral Chapel, with resurrection celebrated at I p.m* tomorrow at St. Alphonsus Roman Catholic Church, Munroe St. and Brazier Ave. Dawson is remembered as a pleasant, outgoing personality who had controversy as his constant companion. That’s the way it was since 1953 when, as manager of an intermediate hockey team in Rivers, he was told by the Manitoba Amateur Hockey Association he had used ineligible players and his team was disqualified from the provincial playoffs. Dawson recalled that he arose at the MAHA’s annual meeting that spring, voiced his opinion of hockey’s administration in Manitoba and walked out. The same day he was invited to join the MAHA executive, the first step in an exciting and pressure-packed career in sports administration in Canada. He was president of the Canadian Amateur Hockey Association during its most demanding period. In January, 1970, he stood up at a Geneva meeting of the International Ice Hocky Federation and told the global body Canada no longer was interested in staging the world championships. The decision, taken after the international group had reversed itself on allowing Canadian professionals to represent their nation, climaxed Dawson’s hockey administrative career. Dawson had been president of the MAHA for five seasons before joining the CAHA rules committee and he became a vice-president in 1966, the same year he won the Hamiota provincial seat in the Manitoba Legislature for the Liberal party. In 1968 he was named CAHA president. He resigned in January, 1971, to become a sports consultant for the federal fitness and sports people in Winnipeg. He was beaten in the 1969 provincial election. Bom in St. Boniface, Dec 17, 1925, he was the son of Thomas and Irene Dawson. He was educated at Provencher School and married Madeline Catherine O'Callagan June 29,. 1949. They had five children, William, Patrick, Nancy, Donald and Randall. He was a councillor for the town of Rivers from 1957-65, he was a reserve officer in the RCAF and was most active in Kiwanis and air . cadet programs during his stay in Rivers.;
Clipped by Jason P. 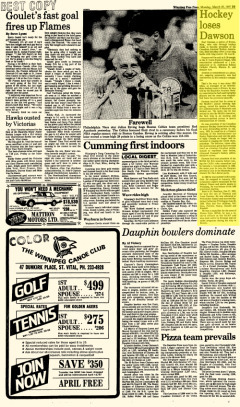