CNE to Operate Pick Committee of Fame NHL MONTREAL (CP)—Assurance that a hockey hall of fame will be in full operation at the Canadian National Exhibition in To- m ♦ ronto this year was given Thursday by leaders behind the project;HOAD VICTOR IN NET TOURNEY MELBOURNE (AP) — Aus-tralia’s vLew Hoad Thursday night won the $22,400 Australian round - robin pro. tennis tournament by defeating countryman Frank Sedgman 6-3, 5-7, 6-3. The victory gave the 23-year-old Hoad a 5-0 sweep of the tournament and the $5,000 first prize. Sedgman finished second and Won $3,360. The names of nine men who will be asked to serve as selectors were announced. Lester Patrick of Victoria, the farped silver fox of hockey, provisional'chairman. Plans and progress on hockey’s hall of fame were outlined at a luncheon arranged by managing director Frank Selke of Montreal Canadiens. With him were President Clarence Campbell of the National Hockey League and Harry Price of Toronto, CNE vice-president and chairman of the CNE sports committee. The CNE and the NHL have combined on the project, which means abandonment of ‘ the hockey hall of fame started in Kingston, Ont., several years ago by the late Capt. Jim Sutherland. SELECTORS NAMEf) Those named for selectors are: Alberta Chapter CANADIAN FOUNDATION FOR »■ POLIOMYELITIS and REHABILITATION SPONSORED BY THE ALBERTA PROVINCIAL COMMAND CANADIAN LEGION, B.E.S.L. Mervyn (Red) Dutton of Calgary, former president of the NHL. ‘ A1 Picard of Regina, former president of the Canadian Amateur Hockey Association. George Dudley, Midland, Ont., secretary-manager of the CAHA. Milt Dunnell, sports editors of the Toi’pnto Star. Marcel Desjardins, sports editor of La Presse, Montreal. Baz O’Meara, columnist and now-retired sports editor of the Montreal Star. Danny Gallivan, Montreal, hockey broadcaster and native of the Maritimes, the area he will represent ’Walter Brown, president of Boston Bruins of the NHL, as United States representative. The hockey hall of fame will be separate from the CNE’s present sports hall of fame. The CNE ind NHL will build and maintain the new hall. At last years’ CNE sports hall of fame, hockey trophies were shown and drew tremendous attention. Price said there is a possibility the hockey hall of fame may become an all - year affair, and not restricted to the three-week duration of the CNE ealt;Jh year. • b If costs can be met, the physical properties of the hall of fame — trophies, awards, sticks that have made hockey history ahd everything—might be moved to different cities in Canada for t •« - * short' stays. Campbell, Selke and Price all stressed there is no reflection on Kingston and its citizens in the CNE and NHL taking over the hall of fame. They applauded the efforts of Capt. Sutherland but said that despite of enthusiasm for the project in Kingston, the amount of money that would be needed, for construction and maintenance of a suitable building got beyond means; The building alone would cost around $215,000.;
Clipped by Jason P. 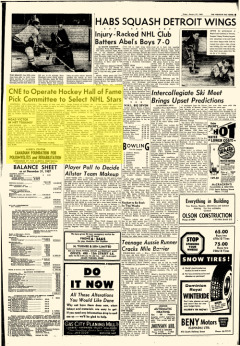