Allan Cup Finals Awarded To West TORONTO, Jan. 2,—The Allan Cup play-o ffs for Canada’s senior hockey chanpionship, suspended In 1944-46 because of war conditions, will be renewed this season with the final round in western Canada, the Canadian Am* ateur Hockey association announced. The Memorial Cup ser- I association; and G. S. Dud-les for hockey s junior charr | ley, Midland, Ont., I.I.H.A. pionship has been awarded to Toronto, starting April 13. The announcement, containing a complicated Allan Cup ‘draw”, also said the C.A.H.A. has accepted a Br itish Columbia offer to have the association's annual meeting in Vancouver May 2-4, that past president Frank Sargent and vice-president A1 Pickard would supervise western senior and Junior play-o ffs, and that president Hanson Dowell and vice-president Norman Dawe will similarly supervise eastern play-offs, all to be on a point bases. In the Western Canada Memorial Cup playdowns, Thunder Bay will play Manitoba on Winnipeg ice with Alberta meeting British Columbia. Saskatchewan plays the Alberta - B.C. winners. The winners of the series will play for the Western title and the right to travel east in quest of the Canadian title. The Allan Cup playdowns will see the Manitoba champions travel to the Lake Head' secretary. The committee will forn ulate plans for “future international competition and closer co-ordination in classification of clubs. The plans will be submitted to C.A.H.A, branch presidents at Winnipeg next March 9-10 and‘the final draft will be presented for adoption at the C.A.ILA. annual meeting in May. The I.I.H.A.'s annual meeting will be held In Vancouver, with a preliminary conference May 1 and s final session May 5. While the C.A.H.A. meet* ing dealt with requests for transfers, reinstatements and financial aid and handecf down clarifying rulings, Dr. Hardy said the I.I.H.A. since 1939 has turned over to affiliated members $45,709 in player payments from professional leagues. The announcement, sequel to the'association's semiannual meeting here this week-end, said the final round will be played In Vancouver if a British Columbia team qualified. Otherwise ihe final would be play- s for the series. World expansion of hock- e(j ln the “eligible” prairie ey was discussed and routine city, business conducted diring the week-end at semi-annual meetings of the international Ice Hockey association and the Canadian Amateurhockey association. An announcement said plans for post-war expansion in “world-wide hockey were freely discussed by I. I. H. A. president Dr. W. G. Hardy of Edmonton, as chairman. Hanson Dowell, Middleton, N.S., C. A. H. A.' president: Thomas Lock- Dr. Hardy said a,preliminary payment of $4,590 for players turning professional in the 1944-45 season has been received from professional leagues and alloted to C.A.H.A. and U.S.H.A. clubs concerned. At a Joint meeting of the N.H.L. relations committee, and the I.I.H.A. it was mut* ually agreed, an announcement said, that both parties will enforce player suspensions for failure to fulfill a hirt, United States Amateur tryout contract.;
Clipped by Jason P. 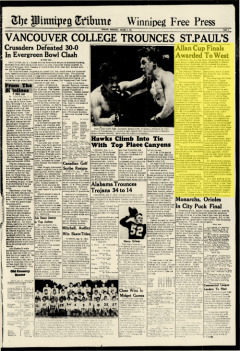