Herald photos by Tim Appel A NASA weather balloon veered off course and parachute from the area of 17th and Goliad, landed in Big Spring Wednesday evening. TU Below, police and city officials inspect the roll Electric employees (top) attempt to remove a cage carrying weather experiments.Straying weather balloon mistaken for UFO by many By MICHAEL DUFFY Staff Writer A National Aeronautics and Space Administration weather balloon, initially mistaken by some as a UFO, veered off course Wednesday, adding a little excitement to a hot summer night for many southeast Big Spring residents. The weather balloon, launched about 11 a.m. at Palestine in East Texas, landed on a TU Electric main feeder line shortly after 8:45 p.m., causing 2,400 customers to be without electricty for about 20 minutes, officials said. A sheriff’s dispatcher received several calls about possible UFO sightings and police department lines were busy for an extended period due to inquisitive callers. Big Spring District Manager Hooper Sanders said the power line, which he called a “main artery,’’ did not sustain any damage and when TU Electric employees removed the large parachute, power was quickly restored. The power outage also had repercussions for between 6,000 and 8,000 Big Spring Cable TV customers, who lost transmission completely or had it affected while repairs were being made. Bob Howie, a pilot who charts the course of weather balloons launched by the National Scientific Balloon Facility (in Palestine), said the helium-filled balloon, weighted by a large roll cage, carried a weather-related experiment from scientists in Belgium. “The balloon reached heights of 132,000 feet and it basically just got blown off course,’’ he explained. NSBF officials in Palestine have been launching weather-balloon experiments since 1963 and Howie stressed that it is not unusual for the balloons to stray from chartered courses. “We have no control over the direction the wind blows,” he joked. Howie added that scientists from MIT and Harvard regularly conduct experiments launched from Palestine. “We work in conjunction with the federal government,” said Howie, who added he was “debriefing” • BALLOON page 8 A;
Clipped by Luis P. 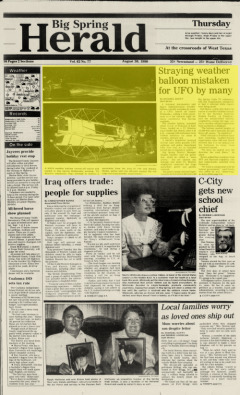 Other Clippings by Luis P.