OBITUARY MRS. HENRY JACKS I In failing health for the past two years, Jessie Ann Moffat, beloved wife of the late Henry Jacks passed away in Bowmanville Hospital on Dec. 26, in her 81st year. Born in Clarke Township, the daughter of the late Herbert Moffat and Harriet Helson Moffat, she attended No. 9 school. On October 12, 1887, she was united in marriage with Mr. Wm. Henry Jacks of Hampton, who predeceased her on Jan. 1, 1937. To them was born one daughter, (Elsie), Mrs. Archie Thompson, who also predeceased her on Aug. 29, 1938. She is survived by three ; granddaughters, Beryl, Hilda and Gladys Thompson. Except for' a short time at Hampton, after her marriage, she has lived in the Salem neighborhood practically all her life. The funeral took place from the Morris Funeral Chapel on Mon. Dec. 29, with interment in Bowmanville Cemetery. Pallbearers were Messrs. Meredith Moffat, David Park, Carl Bradley, Whit- | ney Lang, Wesley Werry and Chas. Carruthers. Friends and relatives attending from - a distance were Mr. Fred Harvey, Mrs. Annie Lang, Mr. Whitney Lang, Toronto, Mrs. Hugh Murray and Mr. Meredith Moffat, Oshawa, and Mrs. H. H. Willoughby, Newmarket. I I;
Clipped by Rick M. 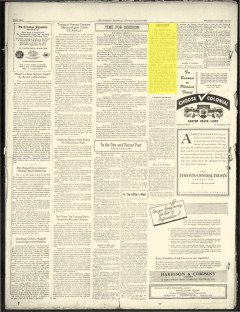