After an illness of long duration. there passed peacefully away at his home. Man vers Road, on January* 1, William Henry Jacks. Deceased was born October 3rd. 1866. on the homestead west of Hampton, being the son of the late James and Mary Scott Jacks, and lived there until after his marriage. From there he moved to the Salem neighborhood, and has lived there ever since. On October 12. 1887, he was united in marriage with Miss Jessie Ann Moffat of Clarke, who with one daughter. Mrs. Archie Thompson. survives him. and three grandchildren. Beryl. Hilda and Gladys Thompson; also one sister. Mrs. Jane Oliver. Calgary, Alberta. The floral offerings were very beautiful and greatly appreciated. The funeral sendee was held on Monday, January 4th, and was conducted by Rev. A. M. Wootton, pastor of Tyrone circuit. The pall bearers were Messrs. E. J. Silver, W. G. Werry, W. W. Henderson, R. H. Battle, E. S. Trimm and H. J. Gaud. Interment took place in Bowmanville Cemetery.;
Clipped by Rick M. 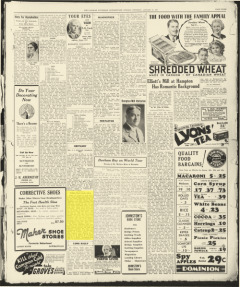