OBITUARY MRS. ROBERT BAILEY The death of Mrs. Robert Bailey, 5 Flett St., occurred on Sunday, January .16, 1966, at Memorial Hospital, Bow-manville. She was in her 71st year and, although in poor health, for two or three years, her death was very sudden. Daughter of the late Mr. and* Mjts. Elias S. Trimm (Sarah M. Moffat), the former Ethel Mae Trimm was born in Bowmanville and received her education in Newcastle. Twice married, she in surviv- [ed by h£r second husband. Mr. Robert Bailey. The first marriage was blessed by two children. Mr. and Mrs. Bailey resided in Windsor for many years, and on his retirement ten yeans ago moved to Bowmanville. The deceased was an rdher-ent of Trinity United Church Bowmanville, and her chief interests centred around her home and family. •Surviving besides her husband are two children, a daughter, Mrs. David Park (Helen) of Bowmanville, and a son, Mr. Jack Trimm of Wind- opuxvc ux vim promises and prayers made when ihs N United Church Women was inaugurated in 1962. In reflective mood those present evaluated their progress, numerically, financially, and spiritually. As we move forward in the New Year, women of vision, enthusiasm and endurance are needed in this world of change with so many opportunities for ser- sor. Also surviving are three grandchildren, Thomas and Kenneth Park, Oshawa, and Glenma Park, Bowmanville; and one great - grandchild, Catherine Park, Gshawa. The funeral service was held from the Morris Jftmeral Chanel, Bowmanville, on Wred-nesday, January 19, and was conducted by Rev. George K. Ward. BA, BJD. Interment was in Bowmanville Cemetery Among the lovely floral tributes, evidence of the esteem in which the deceased was held, were those from Memorial Park Association, nd Strathaven N ti r s i n g Home. Pallbearers were Messrs. R. Knox, Arthur Coverly,s Colin Taylor, Walter Park, Percy Leach and Archie Thompson.;
Clipped by Rick M. 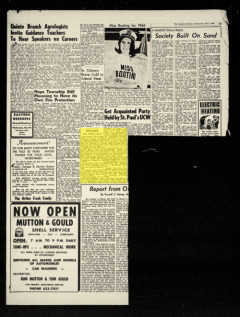