Mission Continued from Page A1 scheduled tentatively for December. He explained that the threat of air attack has lessened in modern warfare, making air defense artillery less important. “Looking at Iraq and the Middle East, everything has been pretty much urban warfare.” said Hoogerhuis. who recently returned from a one-year tour * of duty in Iraq. Discussions in the New Mexico Army National Guard about converting from air defense to other missions began in 2004, Hoogerhuis said. The guard leadership conducted demographic studies of local communities to sec what National Guard missions the popuiation could support. Southeastern New Mexico came up as a good fit for logistical support units, Hoogerhuis said. Roswell will have the new 804th headquarters, along with engineering and transportation detachments. The other 804th detachments will be stationed in Portales. Hobbs. Carlsbad and Rio Rancho. With the new engineering and transportation capabilities, Hoogerhuis said, (he units of the new 804th can more ably perform their peacetime missions. For example, he added, heavy construction equipment and trucks can be put to good use during battles against natural disasters like forest fires. “I would sav the role is a lot more beneficial to the state and to combat operations,” he said. Despite the end of a long tradition in artillery, most of the guardsmen in the 1-200 are taking the conversion to logistics well, Hoogerhuis said. “When there’s opportunity lor growth and development, (hey take it pretty well.” he said, adding that after the troops attend their engineering and transportation conversion training, they will be skilled in two specialties. “They’re multi-functional now, he said. Jack Aldrich, a Roswell resident who served in the 200th Air Defense Artillery during World War II, when it was known as the 200th Coast Artillery (AA), expressed sadness but understanding about the unit’s transformation. “In this day and age, things change, and we must accept it,” he said. “It’s for the belter of the National Guard and the nation.” Aldrich, who fought in the Pacific theater of operations with the 200th, was captured by the Japanese and survived the Bataan Death March. He pointed out that the current conversion isn’t the first time the unit has changed missions. Before becoming the 200th Coast Artillery (AA) in 1940, the regiment was a horse cavalry outfit. Aldrich added that in those days, the idea of switching from cavalry to coast artillery in arid, land-locked New Mexico seemed “farfetched” to many people. Hoogerhuis said the battalion leadership is well aware of the unit’s rich history and is trying to keep the unit nickname, “The Rough Riders.”fADVANCEDE;
Clipped by Justin Y. 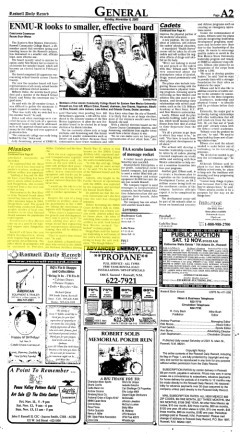 Other Clippings by Justin Y.