II BUNNY LAKE IS MISSING »» (At fht Plan) Mvsfmy meiooram* with screenolav by John and P*re»oP« Mortimer (from ** novtl bv Evelvn Pipe*-). oroducpd and directed by Otto Preminoer and released by Columb-a oictures with the followiii* principal players: Inspector Newhouse... Lawrence Olivier . . ^ :e Olh Ann Lake ................Carol Lvnlev Steven Lake ............. Kelr Du I lea Horatio Wilson ........... Noel Coward Ford.................Martita Hunt Miss By Giles M. Fowler (The Star's Motion Picture Editor) EVERY NOW AND THEN, give me a good, nerve-grating detective mystery to perk up the pulse, clear the head and keep the fingernails down to size. Give me a detective mystery like “Bunny Lake Is Missing, 99 which has about all the requi sites I demand of such films. It has, first, a screenplay at lucid and full of false once leads, incidental curiosities and awful surprises, like the classic nightmare. Never mind that, also like a nightmare, the script has a loophole or two in its logic and a couple of scenes that seem absurd in retrospect. Coscenarists John and Penelope Mortimer still deserve ,» . . ► • - * * « * ? .VpVVV.V mm BOISTEROUS BOXER praise for an expert adaptation of Evelyn Piper’s novel. Second, the film has some adroit direction by Otto Prem- sp.ctkm of a mouse that impi across the stoop at the home African photographer. McNallj injure the mouse—(Wirephoto). as an eccentric retired headmis tress. inger—the kind of sly, non-inter fering direction that seems to let suspense build itself. Third, “Bunny Lake’* has solid acting from a top-notch cast, which includes Laurence Olivier, Carol Among the lesser players, you Finlay Currie, may recognize Anna Massey, Michael Wynne and the Zombies. The latter are singers, and the reason for their brief inclusion in the film is not, Lynley, Noel Coward, Keir Dul-lea and who knows how many to me, entirely clear. “ECCO 99 fine character actors. Fourth, the film has London for a setting, proving anew that the city of night fogs, damp and 221-B Baker pavements street is still the best city in the world for a whodunnit. revealed (At tha Shawnet, Leawood, 63rd Street, Hillcrett, Lake Perk, Heart and Isis). Documentary with commentary bv Francesco Mazzei, narrated bv Georoe Sanders, directed bv Gianni Prola and distributed bv Cresa Roma Films. Inc. By Dennis Stack (A Member of The Star's Staff) Almost anything about the story could damage Its effect. So I’ll just note that it involves a missing child, or what seems to be a and that the those HERE IS another of “round-the-world tours’* styled somewhat after “Mondo Cane.’’ “Ecco” is not as tasteless or child, throws missing mystery the child’s together mother, uncle, the Scotland Yard and various bi whole of larre minor characters who may or may not know some-Jiing about the kid’s whereabouts. as pointless as some of its companion pieces, but nevertheless it is a good way to waste most of 100 minutes. Secret societies, sexual oddities, etc., make up a lot of the footage. In other words, it is the all-around peeping Tom’s delight. It’s hard to imagine Olivier in he role of a mere police ins pec -or, but there he is, and a suave, ntelligent job he does with the art. Miss Lynley is convindng-y haunted and hysterical as the mother, while Dullea, as her brother, provides a comforting measure of soundness and rea- EARL BOSTIC IS DEAD Heart Ailment Fatal to the Jazz Musician Rochester, N. Y. (AP)-Earl ion. Coward is superbly offensive as a lecherous old collector f whips and shrunken heads, tnd Martita Hunt is marvelous Bostic, 52, jazz musician, died today in Highland hospital, where he had been a patient since he suffered a heart attack Tuesday. Bostic, of New Orleans, was stricken in his hotel room. His trio began playing a one- week engagement here Monday.; 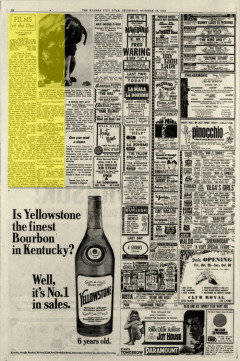