Hearts of the World

Hearts of the World” Pleases Heilin Audience.BATTLE SCENES REALISTIC % ©f Present-Day Conflict Hu-Fine Qualities of Beautiful Drama. Full of Amazing Incident#* of Battle. Bait i»? J9c«a«i# on tln battle ground of France and through all ItJi monster military achievement running what has been called 'The Sweetest Love Story Ever Told*** thxf and more t» D. W. Griffith’* ’'Heart* of the World/* which opr m i! an engagerm'Ht at the Helltg last night A romance lt;*f the present -da conflict, it hiu* ail trie fine qufeiltte* of a beautiful drama, full of amusing Incident of battle, taken In pictures under the AU’iptcen of the British government, Powiibly it has been named Hearts of the World because it tiroetf straight to the heart* of the world of grilled and awe-filletl folk, who sit entranced a#* the story ls reeled off. The production Is it 50-50 combination of Rigan tic bat tic ncenin, staged with realism, witrs beautiful atory of tremen/iriUfi heart Interest. The conflict, the battle scenes in the trenches, and the maneuvers of war serve only as a background for the story. W«Ulr ##«•»*» Rrallsflr. The story, which is In two parts, ban prologue which introduces Sir, Griffith, «ud shows n. bit of the personal equation he reflects in securing big film productions. H v was t hr first American to set foot In the front-line trenches before the United State* entered the war. and he personally superintended the iliming of the battle scenes. So pa pie r -m a eh c scenery, no artificial backgrounds, no studio proofs and no supe soldiers used. Real soldiers, save uf course for the actori* and the folk concerned in the recital, wore used. The story Is see in a peaceful, happy village A little American mold, the daughter of an artist, and an American lad, the son of an artist, have met and are betrothed. This is told In a simple, pretty romance. Then war Is declared and all of the causes contributing to its declaration are flashed before our vision in interesting detail. The meeting of the English Parliament on th* eventful night when the vote was cast for war. the session of the French Senate voting upon the declaration of war, thr session of the Cabinet awaiting the fatal hour when th*-ultimatum to Germany would expire* all come a?* big dramatic scenes* provocative of applause, in the prologue. Fall of Villases Stirs. The great drama begins when the German hordes enter France. The bombardment and destruction of the little villace Where Marie and her aged mother and grandfather live, the acetica of the evacuation and the distress of the villages under the bombardment, lb** death of Marie’s mother and grand-fa» her, both killed by explosives sent by th*- Hun. a re all graphically told. The last half of the story tells of life in the village under German conditions in «pl«mdld photographic realism. It relate# the sufferings and privations of the captive villagers, and In one magnificent scene shows :h« preparation^KNOCKOUTA Comedy Riot in 2 Sections to relieve the tension, and some wet tdddlss bring smiles For the moat part, however the story is strongly dramatic. for the rescue of the village by the French, the massing of their troops, the struggle of the French soldier* to recapture tbs town and free their loved ones and the captives, Ing from collars and crypt to pray for their deliverance. Every character In the play seems* real and there is only One dramatic, educational and artistic about ft all. A company of excellent aere«*n artists portray the roles. Lillian Gish Is the girl Marie, and Robert Harron is the boy. Dorothy Gish and Georgs Fawcett afford a delicate vein of comedy I wo CntrTit** of Flour Seized. SEATTLE. Wash. July 29 — Two catii- of flour, consisting in all of 14 49-pound *«ck*4 were seiaed today by Federal officials near Seattla and the owners charged with hoarding of foodstuffs. * No one knows the humiliation of being a wall flower** better than the girl with a red, rough, pimply complexion* If ytmrskin is nnt fresh and smooth, ©r has suffered frocp an unwise use of cosmetics, try R**inplSoap and R esinol Ointment for a week and see if they don’t begin to mi ^e a hie ssed dlffe rence. They also help to make hands and arms soft and white, and to keep the hair live, glossy and Irer from dandruff. AH draftin’ and inlm Ls toilet eood* mL! Re*. s»cl Oratm-rrl crtd KmJral Soap. Yc»uM beoct ?«* ftm * Trial ft*** Wr,*- Drpt. S-S ***** H*k£ marc. Aid.; 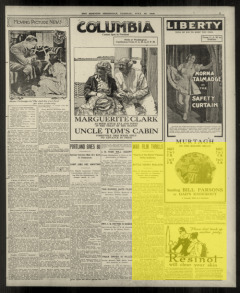