BY KITTY KELLY. “A DOG’S LIFE.” Written and produced by Charlie Chaplin; presented at the Rialto and Me Vickers. Himself ...................Charlie Chaplin The new singer............Edna Purviance The thoroughbred mongrel..........Himself did you notice how Chicago shook yesterday? But however detectfully the most discriminating seismograph regis- tl e r e d m o ti o n , waves, there was;!; no foundation shaking, merely human rocking, so *twas all safe. The explanation, of course, is Charlie Chaplin, and in his present manifestation, “A Dog’s Life,” there is adequate reason for the phenomenon. He has proved himself a mighty good investment for his backers, the First National CHARLIE CHAPLIN. Exhibitors' Circuit. “A Dog’s Life is a crystallization of the best Chaplinese. It has a good score of superiorly humorous situations; it has abounding use of that jolly trick of his of turning intention into unconsciousness; it has some other good players; it has sprightly burlesque, and it has a delightfully nice, common, little dog, set blithely into situations that no one can resist, and it has practically nothing out and out objectionable. • • • * THE movies versus the vaudevilles was the standing bill at the Rialto and McVicker’s yesterday. To good jokes and fair acts the audiences gave only indifferent attention and scattering applause—and there was S. R. O. But when the Chaplin reels came u on one felt a general stiffening of-» backbones, an awakening and coming to attention of the houseful. The first silhouette scene brought the pent up applause—and thereafter the audience, if not the house, rocked. MOVIES HAVE THE TALKIES ON _THE JUMP Q W. GRIFFITH, scheduled to arrive at 2 o’clock yesterday, got in about 8. so missing the liberty loan meeting held at the La Salle Theater in the afternoon. But he was there to make a plea that people lend their money freely to the government when multitudes were giving their lives, and the house applauded him to the top gallery. He was there in the office, too. chuckling over the sensation his photoplay, Hearts of the World,” is making in New York. You can be proud of your movies now,” he enthused. “That picture is doing more business than any theatrical attraction in town. The speculators are thriving on it. Why, any number of seats are selling every evening for 55. Morris Gest is talking about two theaters, and he ought to have them, for it's turning enough people away. Mr. Griffith told some more things about himself and his picture which will be relayed in the Sunday number of the Examiner, as also some words by George Fawcett, his traveling companion. They won’t be here for the opening of the photoplay at the Olympic, whose date is now advanced to Wednesday, April 24, instead of Monday. I’ve got to get back, for I’ve a 510,000 company waiting for me with nothing to do. So Mr. Griffith explained his haste. I’m going to make some more movies.; 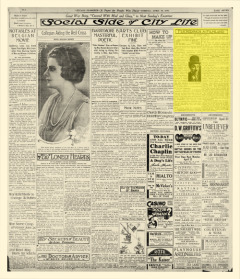