Clipped from US, Pennsylvania, Uniontown, Uniontown Morning Herald , May 2, 1929

D. Frank- Johnson, Point Mar ion, Sentenced to Pay $200 Fine and Costs; Court News. HOOVERS EXONERATED Entering a plea of guilty to violating the automobile law by driving an automobile while Intoxicated, I). Frank Johnson of Point Marlon was sentenced to a fine of |2(o and costs and three months in jail, with the proviso that if the fine and costa arei paid the Jail sentence will be suspended and Johnson admitted to parole for a period of one year. Johnson was arrested by State Patrolman Charles L. Royle January 27 while driving along the Morgantown road. There was no wreck nor was anyone Injured,; 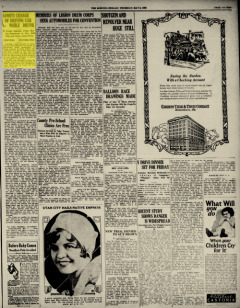