Autopsy shows Hart ] died of. heart attack OKLAHOMA CITY (AP) -The chief state medical examiner Tuesday said a preliminary autopsy indicated Gene Leroy Hart, acquitted only two months ago in the 1977 slayings of three Girl Scouts, had a history of heart problems and died of a heart attack. However, following Hart's death at the Oklahoma State Pentitentiary Monday his family members said they suspect foul play in the death. Dr. A. Jay Chapman said a preliminary autopsy showed death was caused by acute cardiac disfunction brought on by severe blockage of two major arteries to the victim’s heart. He said tests indicated Hart had been suffering from “extremely severe” heart disease and had suffered a major coronary attack in the last three years. Hart, who was only 35, was stricken Monday afternoon after about an hour of lifting weights and jogging in the prison exercise yard at the prison in McAlester. Chapman said there was “nothing to indicate that death was anything other than natural. He said the autopsy showed 98 percent blockage of one artery and 80 percent blockage of another. The medical examiner said no drugs were found in the body, other than Lidocaine --a drug used to control cardiac activity during treatment of heart attacks. A complete tox-ological scan will be conducted later, but Chapman said he expected negative results. Although members of his .family said Hart had no •history of heart disease. .Chapman said the autospy ’.showed Hart had suffered a major heart attack, probably in the last three years. He said he understood Hart was treated for chest pains about three years ago, but indicated that heart trouble was not diagnosed at that time. Asked if Hart’s condition should have been diagnosed \ during a routine medical 1 checkup at the time of his in- s carceration on charges of kill- ! ing the three Girl Scouts. 1 Chapman said: “Probably ‘ not. He said it was not unusual for someone of Hart’s age and apparent good physical condition to suffer heart attacks. The medical officer refused to speculate if Hart's long, controversial trial added to the heart problems. Rev. Bill Grass, a Locust Grove Freewill Baptist minister, said Hart’s family was taking the news of his death “terrible. “They just don’t believe that Gene died of a heart attack. Grass said. “They think someone put something In his food or he was drugged or something. He said Hart's mother, Ella Mae Buckskin, learned of the death from neighbors who had seen media reports. She is under sedation and she collapsed after hearing the news, he said. The minister also said Mayes County Sheriff Pete Weaver contacted him about the death and asked him to find Mrs. Buckskin, but she heard of the reports before he could locate her. Corrections Department spokesman Nancy Nunnalty said efforts had been made to reach Hart’s mother, but the story of the death had to be released before the notification to counteract rumors Hart had died from “murder, suicide or poison.LATE PAPER? DELIVERY PROBLEMS? Please coll the Journal-World and leove a messoge before 7 30 p.m. weekdays 5.30 p.m. Saturdays and 10 a.m. Sundays. PLEASE CALL843-1663; 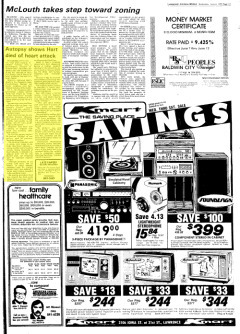