w 11 (I iC c s. y 5 dFour Men Are Held In Alleged Assault Four Gates men were arrested yesterday by Constable Walter Brown for an alleged assault on Lester McCann, of R. D, 2, Smith* field, last May 28. The suspectiv Bozedar Bukovac, 24; Joseph Ooleta* 22; Thomas Smercheck, 24, and Alfred Stantelln, 24, were brought before Alderman James Hoover and released under $500 ball pending as* tion at the next grand jury. The incident occurred when McCann stopped his car to help the four men get their vehicle back on the road after they had run off the highway. After the car was back on the road but not in running condition, McCann said the men Insisted that he help repair the damaged car. When he refused they beat him 11 and left him in an unconscious condition along the roadside, he «aid. ); 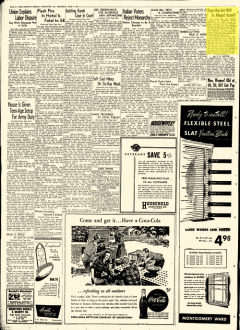