MISSING FROM A1 ever can be scientifically confirmed as a murder. Nor is it likely the cause of death can be determined from the skeletal remains, Rodriguez said. Comparison of dental records confirmed the identity of the remains Tuesday afternoon. Formal confirmation was not completed until Wednesday when •the victim’s mother, Vera Scott, identified as her daughter’s a turquoise ring and a watch found with the remains. Vera and Jacob Scott have been caring for their daughter’s son, Shanti “Shawn” Scott, 8, since Scott’s disappearance. In 'he last months before her daughter disappeared, Vera Scott said, Scott was receiving telephone calls at work from a man who alternated between making declarations of love and threatening her. “Just before she disappeared she got one again and he said he’d find her alone and when he did he would cut her to bits,” the woman’s mother said. Vera Scott said her daughter had no idea who the man was and had become so frightened by earlier calls that she had taken up karate. Two weeks after the disappearance, a caller contacted the editor of The Register and said he had killed Scott. The caller, who provided previously undisclosed detailed descriptions of Scott’s clothing, said she was killed because “he caught her cheating with another man.” The calls to the family all haveTrying to place a classified ad? Because of technical problems related to the recent fire at The Register, callers wishing to place classified ads may experience difficulty reaching the main number, 558-3311. If so, please call any of the following classified offices: Anaheim, 533-0502 Costa Mesa, 754-6274 El Toro, 768-7783 Garden Grove, 537-5981 Huntington Beach, 841-3310 Placentia, 996-6690 . Thank you for your patience. Dorothy Jane Scott Was reported missing in 1980 been from one man, Vera Scott said. In that time, the caller has claimed to know where she was and has said he killed her. We had the line tapped but he either didn’t stay on long enough or called when it wasn’t tapped,” she said. “He tortured me for three years. When informed by the coroner’s office Wednesday that the remains of the woman found off Santa Ana Canyon Road were her daughter’s, Vera Scott said she felt relief that the uncertainty was over and profound sadness that her daughter was dead. Scott was a secretary for the Swinger’s Psych Shop in Anaheim. On the night of her disappearance she left an employees’ meeting to drive co-worker Conrad Bostran to UCI Medical Center for treatment of a badly infected arm, news accounts at the time of the disappearance reported. Scott, Bostran and a third coworker, Pam Head, stopped at Scott’s parents’ home so she could check on her son. At that time, she changed from a black scarf to a red scarf, authorities said. The man who called The Register after the disappearance said she was wearing a red scarf. After being examined at the hospital, Bostran waited in line at the pharmacy to have a prescription filled, authorities said. Scott went to get the car. She was not seen again. Her car was found about 4:30 a.m. the next day in Santa Ana. Police said it deliberately had been set on fire. Scott's remains were discovered by a construction worker who found a human skull, pelvis, arm and two thigh bones, police said. Police said the remains were not buried, but had been submerged partially in the soil from erosion.; 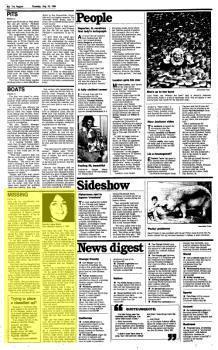