UMlIv through for the day Esther stands lor * u.r at 4 30 in the afternoon show and LaWanda has She often Mop* for dinner ^Ury-g religious convictions at a restaurant before of ^ although she is returning home n0, affiliated with any 4*”* * **ctfd to particular church soul food when dining out or preparing meals her sell -----------— By V ERNON SCOTT HOLYWOOD (UPI) -LaWanda Page plays the Rihle-toting Aunt Esther of Sanford and Son.’' who attempt' without success to salvage Fred Sanford's soul All she gets for her trouble is abuse the ghetto near Watts In fact I call It Beverly Watt* Actually. she has a neatly kept home, which ^ cals Buckingham Palace la south central Los Angeles It is handsomely decorated in French provincial Her lavonte piece of furniture however. Is a thermal chair, which the purchased for her mother with her first check from Sanford and Son In recent years she has devoted most of her time to caring for her Infirm. 82 yearold mother, who recently underwent major surgery and now makes her home with LaWanda LaWanda la an unhurried soul When she's working ■ the series she is up by 9 o’clock in time to report to NBC in Burbank to begin work at 10 When the show is on hiatus. LaWanda stays in bed until noon or later. Except for Thursday and Friday when the show is blocked out for cameras and taped, LaWanda is or maybe Neckeyed peas, cabbage and beeu with braised short riba LaWanda is slender and doesn't have to worry about calories She laughs at Aunt Esthers unstylish wardrobe Her own preference M for figure molding clothes In pastel colors She avoids wearing black - It remind' her of widowhood, adding, it doesn't go good with my own coloring She respects what Aunt CRCST0R.UCLaWanda Page lives in Beverly Watts But off-screen LaWi thinks of Redd Roxx. the series star, as a saint who has kepi her employed for the last few years She Is under personal contract to the comedian LaWanda is three times wed and thrice widowed And she says with pride, 'I outlived all them suckers ” She was first married at the age Of 14 and widowed at 19. Her subsequent marriage* were of dtorter duration and the husbands expired while she was separated from them The actress Is the mother.by her first husband, of a daughter. Clara, who is also a widow At S3 LaWanda wa» last widowed 20 years ago and is determined not to marry again She has a boyfriend who escorts her in dinner; 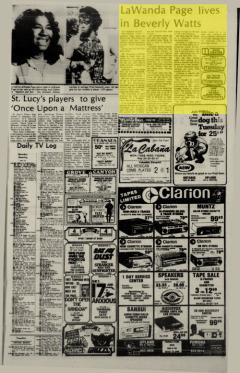