Friday. Not. 11, 1H6__LAS VIGAS SUN 3 Landmark Builder Told 'License Down Drain' hoodlum, ‘ and jou can bet Frank Caracciolo, who built the Landmark Tower casino-hotel only to see it never opened because of ltlgation for several years, was told yesterday his six-year-old gaming license had ‘ gone down the drain.” Caracciolo. also known as Frank Carroll, was also the target of stem questions thrown by Sheriff Ralph Lamb who accused him of being uncooperative” with sheriffs officers Everybody has been paid,, said Caracciolo. Later the sheriff again asked, a rhetorical question. Isn’t, it a fact that they got 38 to 60 owed about *4 million. The sheriff shrugged off the applicant’s statement that he had fought the battle to retain the property” and that he has a very nice letter from Ed OLson, chairman of the1 State Gaming Commission 1 that.” But the sheriff was Insistent, declaring, This Is a guy who has been uncooperative with theMYSTERY MOTION Who know*, you may \ get a Rembrandt for 25( /9:30 A.M. SAT.. NOV. 12.1966 We'll co aucticnmg of; a batch of mystery boxes. V/ho knows what they contain? They ve r •'er been opened. We're also auctioning off some things you can see. like appliances, televisions, living room and dining room furniture, ruga. etc. . MOVMC A STOMtt ^601 N. MAIN ST. looking for hoodlums. Caracciolo and his wife had appeared before the Clark County Gaming Licensing Board to request permission to place two slot machines in the Land mark Coffee Shop. The applicants said the coffee shop is in a temporary hut. but will be the site of a permanent coffee shop. They plan to sell food to construction workers at the hotel project at 364 Convention Center Drive. Lamb, backed by Deputy Dist. Atty. John Porter, told Caracciolo that the license he had kepr active for six years could not apply to the hilt, a inew location. Weren’t you denied a bank-! niptcy?” asked the sheriff. Caracciolo said he and his wife had fought very hard” to keep the Landmark Tower out of bankruptcy and have succeeded in paying all but a few minor debts hack. Did everybody get their money? asked Lamb. Lamb said the county licensing operation has no connection j with the state’s. Declared the sheriff. There were several hoodiur.is hanging around Carroll's apartments and when we wen: down there; he ran sheriff's officers off— he did that to me personally. Caracciolo declared that the sheriff did not seem to have all of the information about one incident The sheriff implied that Carroll had hid a hood lum In one of his apartments. Caracciolo said he had taker officers to the apartment voluntarily and showed them anything they wanted.” He said he did not know the man was a:Another Link BRENTFORD. Eng. (UPI»— Police using television scan-i ners sent a patrol car to a near-} by highway after watching 15 cars crash in a chain reaction collision. The patrol car became Car 16. per cent?” ) sheriff's office ever since he Caracciolo said, Basically we came to Las Vegas.” - ';
Clipped by A J. 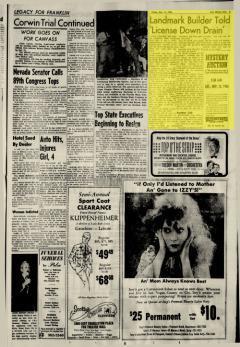