i Landmark s * lElevator ToBe Speedy Elevator Services will install the elevator for Landmark Tower, president J. B. Jackson said yesterday. It will be the West’s fastest elevator, Jackson said, with a speed of 1,000 feet a minute. That would take about 20 seconds from ground level to the top of the 31-story building, 297% feet above Paradise Road and ! Convention Center Drive. Construction equipment was being readied at the site yes-j terday. Construction halted on the Space Needle copy in December, 1962, amid a tangle of law suits. Frank Carroll, an official of the landlord company, said the first visitors should be able to use the outside elevator early ! next year. Several shops and taverns in j the two-story building around i the tower’s base haven’t been j officially notified when they’ll : | have to move. That building will! be demolished. A hotel lobby, offices, shops and casino will be built on its si'e around the tower base.;
Clipped by A J. 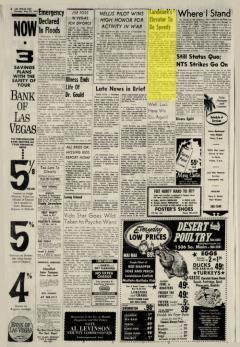