Teamster Money Will Complete Landmark Tower (Continued from Page 1) The mushroom-shaped tower will be topped by a 350-place restaurant. The tower was originally financed by a Whirlpool subsidiary, Appliance Buy* ers Credit Corp. One of the many suits filed against involving rhe building in early 1963 was aimed at preventing a trustee’s sale for alleged defauk on a $3.6 million loan to officers of Landmark Plaza. Landmark started out as a 14-story casino hotel, but, even after construction started, stones kept being added. Up to $3 million had been offered by ABCC for the project. ABCC cut off further funds In December. 1962 Work stopped Judge Roger D. Foley granted an injunction June 23, 1963 to prevent its sale. Frank Caracciolo claimed he was ousted as pnme contractor for the tower. Architect Gerald Moffitt dropped out too. after a series of bluepnnt changes. ABCC denied ousting Caracciolo or agreeing to put up enough money to complete the project. They only agreed to put up a maximum of S3 million they said. The federal injunction was dissolved on Aug. 28. 1964. nearly two years ago, as the unfinished tower continued to intrigue the thousands of visitors who have thronged through the doors of the Convention Center across the street Thus far. it has cost nearly S3 million.;
Clipped by A J. 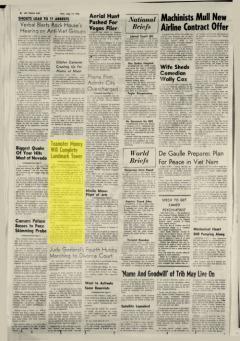