SO The Arizona Republic Wednesday, December 29,1965 % of tri pi w: at va fo ei D ei H ft ‘Darn Cat’ Is Delightful Holiday Fare for Children By WILLIAM J. NAZZARO ‘‘That Darn Cat,” at the Paramount and Indian, is Walt Disney’s Christmas treat for children of all ages. It is fuhny and wholesome. This is a film aimed at children, rather than parents. The story concerns one extremely bright and always hungry Siamese cat named “Dam Cat,” (D.C. for short). One night D.C. follows a package of fresh fish to a rooming house, where two bank robbers, Neville Brand and Frank Gorshin, are bolding a bank teller, Grayson Hail, as hostage. Miss Hall manages to slip her watchThree Theater around D.C.’s neck, and when Hayley Mills, D.C’s mistress, discovers it, she immediately contacts the which goes into action. Naturally, we can't have the robbers caught right away, so the plot goes through a series of detours, at one point into a drive-in theater where the manager, Richard Deacon, of television’s Dick Van Dyck Show, has a hilarious bit in a pie-throwing scene that is strictly out of Mack Sennett. Others in the quite capable cast include Dorothy Provine as Hayley’s big sister, Roddy McDowall as a simpering mama's boy, Dean Jones as an F.B.I. agent, Elsa Lanchester as a snooping neighbor, William Demarest as her suffering husband and Ed Wynn in a brief, but amusing appearance as a kindly watch repairman. Robert Stevenson has directed this charmer with a high degree SAGUAROS — CHOLLACACTUS You’ll see them In forest* of growth on the 24-mile Mountain Drive from Morristown. You'll enjoy every minute of this delight-ful day's outing Drive out, enjoys - Luncheon—12:30 to 2 Dinner—7 to 8 *y RESERVATION ONLY PH. CASTLR Ntil Hardcastlt, Gtn. Mgr.; 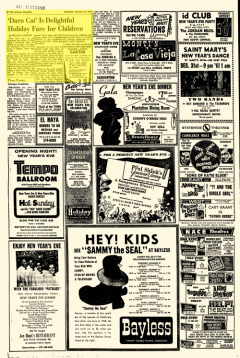