RABBIT’S FSAVES PRISONER“BITCH” So Thinks Quentin Seals, Con aefisriBe, After ReceivingMATT G ARROW BACK On his way across the ‘'bridge of sighs” yesterday afternoon after re-c*iving a sentence to the Western Penitentiary of from four to ten years, Quentin Seals, young Connell sville burglar, attributed the lucky break’' he got at the court's hands to the tact that during the whole ordeal of ’’standing sentence” he held a rabbit’s foot tightly clasped in his right hand. The rabbit s foot, Seal* confided to Deputy Sheriff R. D. War man. probab ly had saved him nrice the sentence. Judge Morrow, who did the sentencing however, was convinced that he had given Seals and his companion. George Handford. a pretty good J si retch in which to think of things. The two young men entered pleas of guilty to robbing aa many as five homes and the authorities who devel oped the case estimate a* many as a doaen homes in addition had been entered. The count on which Seals was sentenced was for burglarizing the home of Dr. J. L .Cochran. 510 South Pittsburgh street, where $550 worth of jewelry was taken. Handford's sen-tetice was based on the robbery of the home of Donald W. Edwards, 718 East Francis avenue, where Jewelry and a gun valued at $40 were stolen. Other homes lost even larger gums. * Sefcteace w*s on the single charge and on the other count® the court directed the same sentences be entered, to run concurrently.; 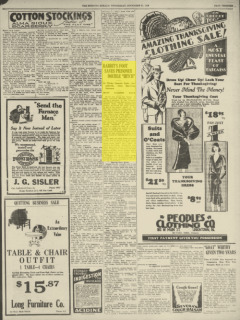