Safe Crackers Loot Strong Box Safe crackers went into operation again Frfnay night, this time breaking open the 1,000 pound strong box of the Point Marion Gas and Oil Company and taking $150.49 in cash together with a number of valuable papers belonging to Osborne Johnson, owner of the building. The safe blowers pried their way through the front door of the building to effect an entrance. In some man ner, unaccounted for, they .were able to remove the round dial combination from the door of the safe. It was then an eaay matter to swing open the door itself by reaching on the In side. Three drawers in the safe were re- | moved. Two of them were found in | a pile of underbrush in the rear of the building. The owners also discovered three cartons of cigarettes which had been taken from the store stock. The j thieves did not bother any of the candy. The cigarettes had been hidden behind a large gas tank in the rear of the building. It is believed the sraokeB wwre to have been taken along but were either overlooked or that the robbers were frightened by an outside interruption. The bandits also Ignored about 100 pennies which were in a cash box in the safe. County Detective Jack Hann and state police are working on the « use I; 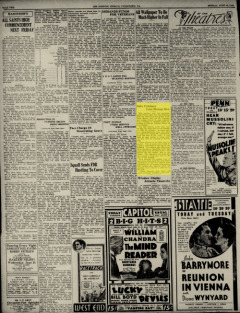