Woman Is Stabbed; Suspect Arrested (Continued from Page One* | in-law and sister, Mr. and Mrs. Earl Trim bath, also of Morrell. Sheean went to the Trimbath home Thursday night to try to persuade her to marry him. According to the story told by Mrs. Trimbath, when Miss Murphy refused, saying “It is too late. I am engaged to another,” Sheean grab- her left arm and breast, as he shouted, “If I can’t have you, no one else can.” Admitted to Connellsville State Hospital, Miss Murphy's condition is said to be fair.; 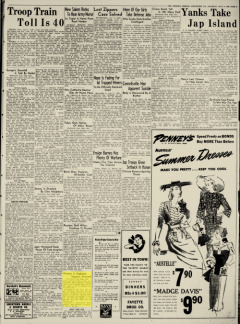